Earlier this year Wythall 12U Boys and Girls were champions of their respective leagues.

Our team of Boo Vale and Mia Enright were unbeaten throughout the summer. The format is both girls play a singles match followed by the girls teaming up for a doubles. In two of their matches it was 1-1 after the singles so the doubles decided the tie, which Wythall won. This is where the experience Boo and Mia have gained by playing in adult tournaments proved vital. In the final match Wythall won 6-0. Without doubt the key match was versus Redditch and again the doubles decided the tie. Wythall won the first set but were 2-5 down in the 2nd set but reeled off 5 games to claim the title.

As with the girls the format is both boys play a singles match followed by a doubles.

Our 12U Boys squad were also unbeaten throughout the campaign. For the first two matches the team was Jacob Cheal and Charlie Spencer. In the first match we won all 6-0 and in the 2nd Wythall won the deciding doubles. For the remaining ties Charlie was unavailable so Thomas Csincsi stepped in. The boys won 6-0 in the 3rd match so the final tie was a straight shootout between Wythall and Belbroughton who were both unbeaten. Again the doubles decided who would be champions. Wythall won the championship tiebreak 10-8, after being 5-8 down at one stage. Jacob was unbeaten throughout the season. 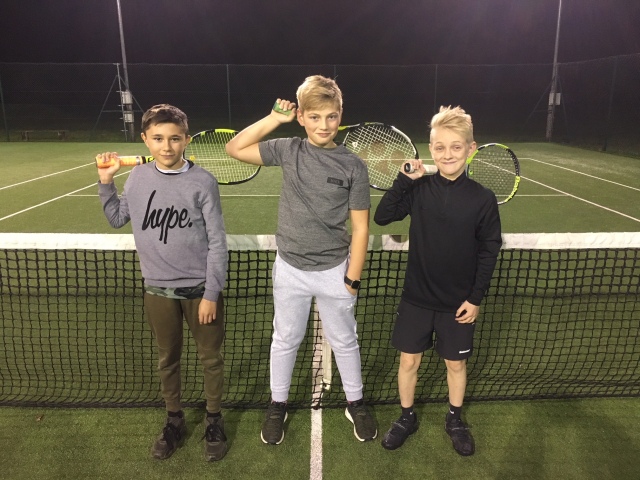